I am working in the field of theoretical and computational (bio)chemsitry, with particular emphasis on the development and application of multiscale computational techniques. Such techniques allow for multi-resolution investigation of molecular systems using all-atom, coarse-grained (CG), and mesoscale simulations. While all-atom simulation methods provide invaluable means for studying molecular systems, the available computational resources limit their direct applicability to many important biological processes due to the large length and time scales on which those processes occur. The CG methods provide a molecular-level description but are significantly more efficient due to the reduction in the number of degrees of freedom that represent the system. This is achieved by grouping some atoms into CG beads and formally eliminating others that implicitly influence the effective CG interactions. The mesoscale methods operate beyond molecular resolution, using continuum-level theories. Combined with systematic discretization techniques, they provide powerful tools for studying biological processes on submicrometer length scales. An example of such description can be the quasi-particle representation of a membrane, where each particle represents a patch containing hundreds or thousands of lipids. The clever combination of those methods and the link between them is a key for addressing many difficult biological and materials science problems.

Associative Memory, Water Mediated, Structure, and Energy Model for Molecular Dynamics (AWSEM-MD) is a CG model that is capable of predicting protein native state and protein-protein association using a fraction of computational time that would have been required using all-atom simulations. AWSEM combines the physically motivated backbone and tertiary potentials with bioinformatics-based local interactions that are parameterized using experimental information (e.g. from the PDB database). Thus, AWSEM-MD can be used for de novo structure prediction as well as for various dynamic and kinetic studies in the absence of a priory known structure of the protein of interest or its homologs. This method was developed during my doctoral studies at the University of Maryland under the supervision of Prof. Garegin A. Papoian in collaboration with Prof. Peter G. Wolynes's group (currently at Rice University) and is used by a wider scientific community today.

In vitro experiments and corresponding simulations in a dilute environment taught us a lot about how proteins fold and interact with each other. However, those conditions are drastically different from crowded and rapidly changing environment inside the cell. Part of my doctoral work was devoted to the investigation of protein folding under fluctuating environmental conditions. Using a combination of simple structure-based CG simulations and stochastic theories, we have shown that both periodic and colored random noise can accelerate protein folding if the characteristic time scale of the noise coincides with the folding time, consistent with the description of the stochastic resonance phenomenon. Our theoretical and computational prediction was confirmed experimentally by Prof. Martin Gruebele’s group at the University of Illinois, Urbana-Champaign. We continue working in this direction to investigate the implications of this finding on various biological processes. 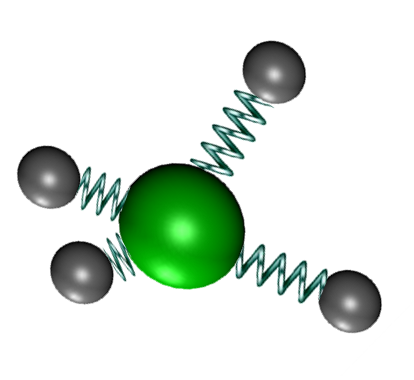 Bottom-up CGing approaches make it possible to extend the applicability of atomistic simulations to larger length and time scales, thus allowing the study of larger systems on time scales that otherwise would not be possible to achieve with the computational resources at hand. While such CG models are usually successful in reproducing equilibrium properties of the all-atom system (such as radial distribution function), they often fail to reproduce dynamic properties, such as self-diffusion rates and other transport coefficients. More specifically, faster diffusion is typically exhibited by the CG system due to the absence of the fluctuation forces from the movement of individual atoms that were removed or reduced into effective CG sites. In collaboration with Prof. Hans C. Andersen from Stanford University, we have developed a method for the construction of dynamic CG models that accurately reproduce both equilibrium and dynamic properties. This was achieved by reintroducing the fluctuation forces into the "non-dynamic" CG model in a manner that does not disrupt any of its equilibrium properties and does not affect the model's efficiency in a notable way. 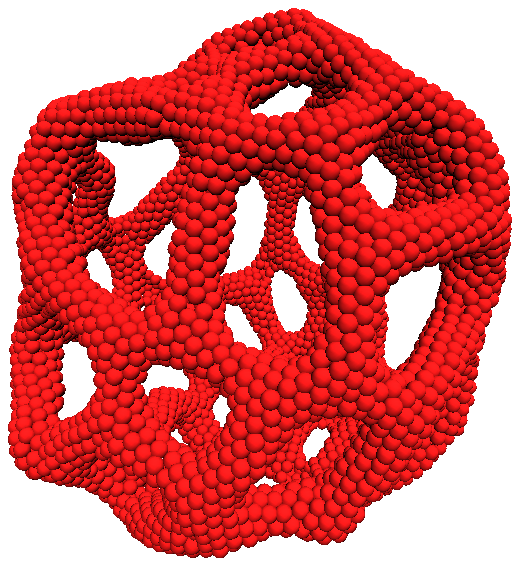 One aspect of my work was devoted to mesoscopic modeling of membrane-protein systems using a discrete quasi-particle approach. It has been shown before that such approaches allow for the investigation of large-scale transformation of plasma membranes (or membrane remodeling) under the influence of curvature generating proteins. The Mesoscopic Membrane with Proteins Model (MesM-P) that we formulated makes it possible to target principally new problems and phenomena on the experimental length and time scales. MesM-P has been implemented in a highly scalable and computationally efficient manner as part of LAMMPS open-source package and is available to anyone interested in mesoscale simulations of membranes-protein systems. Similar quasi-continuum approaches can be used to study a wide range of biological problems, including polymer melts (e.g. of actin or DNA) and active nematic systems driven by motors.

I am interested in the fundamental understanding of molecular mechanisms behind vital biological processes, such as innate and adaptive immunity, gene regulation, and metabolism. I am developing novel and efficient computational methods to enable large-scale and long-time simulations of complex biological systems containing tens or hundreds of proteins, nucleic acids, and biological membranes. The predictions made by those methods will promote the fundamental understanding as well as the development of new therapeutic strategies and drugs.

Binding configuration of Macrovipera lebetina obtusa (MLO) obtustatin (on the left) and I domain of α1β1 integrin (on the right) obtained using AWSEM-MD CG simulations.